Persian calligram is a modern art style composed of a combination of calligraphy, painting and graphics. In the composition of calligram works of art, letters and words are arranged in such a unique and aesthetic way that it becomes almost indistinguishable from them.

Iranian calligrapher Majid Khandagh Abadi, whose ‘Asheghaneh’ (‘Romantic’) calligram exhibition is on display at the Khavaran art gallery until Monday, told Mehr correspondent that his exhibition includes 35 works of art of calligrams, all inspired by the romantic poetry of Persian poets and mystics, mainly Rumi, Hafiz and Sa’adi.

Noting that he used acrylic and gold leaf to create the works of art, Khandagh Abadi explained the calligraphy used in the works, called ‘Nasta’liq’: the combination of the Nasta’liq – a question that currently challenges the calligram. Some fellow artists change the characteristics of the letters, probably to make them more beautiful, and there is certainly an artistic justification for this, but personally I have decided not to change the shape of Nasta’liq.

Speaking of the limits and potentials of calligraming these days, he said: â€œTo begin with, I think there should be no limits when it comes to the art of the calligram; that is, we shouldn’t try to put a line and say that a work of art is just a calligram up to that line and it is no longer a calligram at the above the line. Another point is linked to the public’s taste. Right now, audiences may not be overly appreciating the old style and texture of Nasta’liq, as the script has been in use for centuries and may no longer appeal to modern audiences.

â€œThe third point is related to the skill of the artist. I am talking about myself: for example, my know-how is limited to the creation of my own works and I do not have the courage to change anything in the Nasta’liq letters and combinations; but of course a lot of my fellow artists do and some of them manage to create really beautiful works of art. 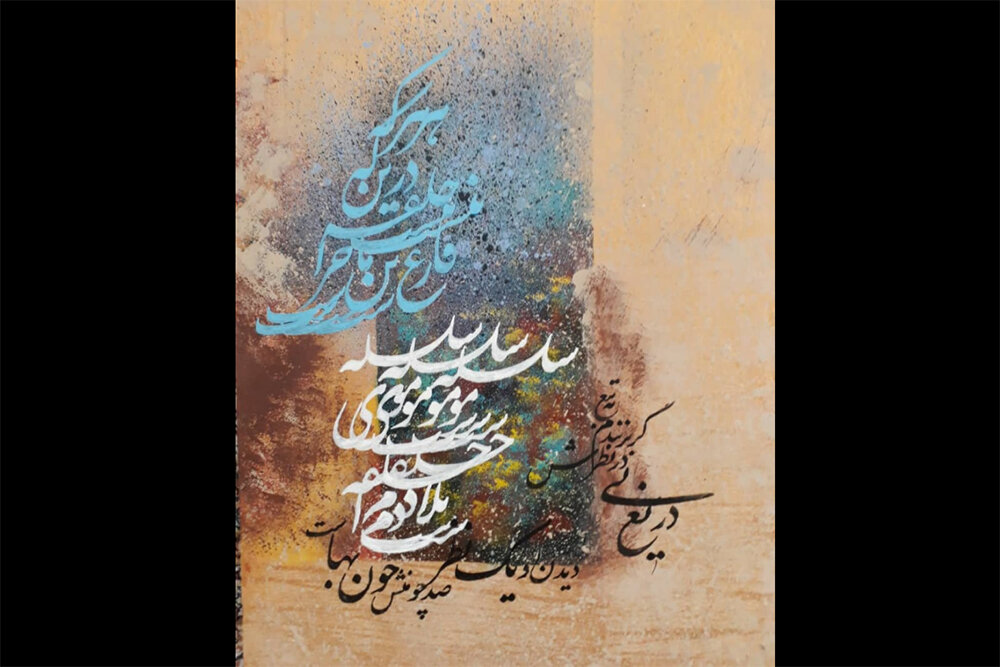 “I think the audience and the artist’s skills are the deciding factors in choosing a particular style over others,” he added.

At the end, the artist spoke about the potential of the Persian calligram to become international: â€œThe truth is that I have not yet had the chance to organize an exhibition abroad, but it is only natural that when the techniques painting take precedence over calligram techniques, it would probably appeal to international audiences more, as calligraphy alone cannot attract audiences from other countries.

Perhaps one of the reasons the Persian Calligram has become so popular over the past forty years was the attempts to make art more accessible to people around the world, especially because Nasta’liq is completely Iranian writing and a foreign audience wouldn’t understand it, â€Khandagh Abadi added.