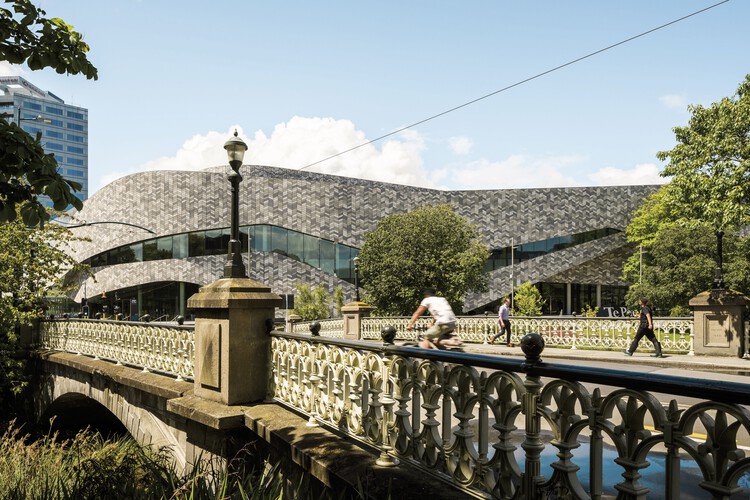 Bi-cultural spirit: The convention center that has turned its back on the typical “big box” – On a plane flying over the wide Rakaia River approaching Christchurch, Woods Bagot architect Bruno Mendes was struck with an idea. It was 2014 and Mendes was on his way to a workshop at the start of the design of the building. Seizing the opportunity to photograph the distinctive braided riverbed gave birth to a prescient and pivotal design idea.

Celebrating and reflecting the region’s multicultural heritage, the completed Te Pae holds its place as a piece of civic architecture in the city’s ongoing re-repair. Its design incorporates craftsmanship, cultural significance and, above all, a sensitivity to the place of Ngāi Tahu / Ngāi Tuahuriri. Puamiria Parata-Goodall is a descendant of these people and advised Mendes and her team on cultural values ​​and storytelling in the design process. “The ancestral bones of the Ngāi Tahu people are found on this land. Through the reconstructed city, the new Ōtautahi (Christchurch) reflects both its Ngāi Tahu and its European history. Maori language, art and stories are recognized and celebrated like never before,” says Parata-Goodall.

Parata-Goodall says Christchurch is becoming a city of conversations that didn’t happen before the disaster. Standing in front of Te Pae, Parata-Goodall asks a passer-by: “Do you see the braided rivers? Would you like to hear about the lore of Aoraki and the formation of the South Island, the story of how our waterways and lakes were formed? What you see unfolding before you now, she says, are these stories. “My ancestors found their voice in our landscape.” As a testament to local/global design and architect inclusiveness, the spectacular Te Pae repeatedly rewrites the rules of the game for convention centers. Unlike conventional convention centers, which tend to be a generic “big box,” the building is smaller in size and wrapped in a flowing facade. Nearly 43,000 face tiles – in five variations, numbered and individually placed – evoke the vast river landscapes that formed the Canterbury Plains and spoke vividly to Mendes in the air that day.

The streamlined profile of the building reflects New Zealand’s iconic Southern Alps, another influence in the central design of the Ngāi Tahu origin story. Choosing to integrate the installation into the city centre, the architects also turned it towards the river, a genius move for Christchurch’s new urban sensibility. The main entrance opens onto Oxford Terrace and provides visitors with easy access to the new Te Papa Ōtākaro / Avon River Precinct waterfront. While minimizing the impact of the building’s mass, Te Pae’s design makes it capable of accommodating up to 2,000 delegates at a time.

All the features of the “big box” are drawn in the center of the site. Moving these requirements away from the edges of the building allows it to be enveloped by the flowing facade and pre-function spaces which provide fantastic views of the Ōtākaro Avon River and all around Cathedral Square. Many convention centers are like small airports – long hallways, devoid of natural light, filled with signs, screens and people. Te Pae is different. Most popular movements occur in areas that seem almost organic. The aisles are bathed in natural light and overlook all sides.

Convention centers are also routinely unresponsive and unforgiving in their place. Here, the architects approached the design with a particular sensitivity to the site. Mendes says the integration of Te Pae into the different shades of the city is hugely important, for local vitality and for delegates attending the events, many of whom Te Pae will be providing their first experience of Christchurch. “From within, framed views organize the site for you. Views of the reception room into Cathedral Square; the opening into Victoria Square; the tilt to the river – these are very specific moves for that the building engages strongly with its surroundings.

“I think that’s what’s special about the project,” Mendes says. “You are connected to Christchurch and it couldn’t be anywhere else.” Warren and Mahoney director Peter Marshall says the facility is a much-needed asset to the town, reflecting the identity of its location. “We are very proud to have partnered with Ōtākaro, Matapopore Trust and Woods Bagot on this world-class facility for the people of Christchurch,” said Marshall. “Upon arrival, visitors are greeted with a warm and welcoming experience through the unique storyline that connects people and place.”